It would be great to be able to specify “play this song 4 times through and then immediately play this other song 4 times through” so I can practice transitions. If this is already possible then apologies (just at the end of my two week trial so haven’t got all the features dialed yet) and I would change my topic to “hey, that’s so awesome, show me how to do this?!” request.

Plus one to this feature please!

Yes, I’ve wanted to add this for a long time! I’m calling this feature Medleys on my roadmap. “Mini playlists” might be another name for them.

As I envision it, you’d create a medley by choosing a few songs to play through, then specifying how many times to play each song. Sounds simple, and I hope I can keep it that way. Unfortunately, the way Strum Machine is coded makes a lot of assumptions about only having one song loaded at a time. I would also have to make a new “medley” schema in the database, and then figure out how to integrate that with the site… would medleys show up in lists, in the library, or what? Lots of unanswered questions around implementation. So I’ve been kicking this particular can down the road for now.

But later this year, I hope to have a chance to tackle this feature in earnest. It should be good timing as well, because I’ll have more strumming patterns available which will make Strum Machine even better for Celtic music, and sets/medleys are pretty common in those styles so it’ll be nice to be able to offer both.

Anyway, thanks for posting and I look forward to being able to say “Here’s how to do this!”

Oooh more strumming patterns will also be amazing! Looking forward to it, and good luck getting medleys/mini playlists sorted - happy its on your wish list too…

Hi Luke - add me to the list of users who would love to see this feature so I could run through some multi song ‘workouts’ in my practice routine.

Big thanks for all your efforts to make it happen when the time is right.

Luke, improving the ability to construct a set/medley would be very nice, but there is a way to do it already. It is clunky, but works. An example in my song list is “Fran’s Medley” (here’s my chart in Strum Machine) which is put together in Celtic fashion (even though it includes Rachel, a WV fiddle tune, and Spootiskery, a Scottish tune!). It was created manually, using the following steps.

Viola! I can now specify the number of times each tune within the set is played. And if I’m really feeling squirrelly, I could repeat the entire medley multiple times. But remember, that might be frowned upon if ever attempted during a live Celtic Session!

Admittedly that process is a bit clunky as I said, but it is functional. Even starting from scratch, I produced this set/medley in less than 10 minutes. And once its done, its done! Plus, because each song is an entire section of the medley, I can easily specify how many times each song is played within the medley.

Perhaps a work around (and I am no computer wiz at all!) is to add the ability to copy an entire song section on to the SM clipboard. This clipboard could then be pasted into a new song. This would be perhaps not the most elegant of solutions, but would certainly be functional, and superior to the method I described above. Adding the ability to ‘merge sections’ would also slightly streamline the process.

Obviously the fanciest way would be to be able to build a ‘set’ or ‘medley’ independently, pointing to specific other songs to add to the set or medley, but while it would be the most powerful, it would surely require the biggest code change, and might have a steeper learning curve as well. Just my 2 cents!

Luke I covered SM in an article I wrote for the Austin Friends of Traditional Music. Here is the link: https://aftm.us/resources/reel-times

Add this to my wish list, too. Would love to work on the transitions between a medley of tunes.

I’d love to see this feature, too, but @ChipBach’s process looks like a great workaround for now. In fact I’m just about to try that for Tombigbee and South Wind

Medleys would really benefit if each piece have its own tempo, repeat option, and especially its own time signature. I’m working on an Irish medley of 3 parts. The first 2 are in 4/4, and the last is in 6/8. The 6/8 part in particular wants to be faster than if I rendered it in 4/4 with the other two. I tried that as it seemed the only current option.

Yes, the plan is for each song in the medley to be able to have its own tempo, “Auto-Finish/Go-To-The-Next-Song” count (gonna call it something else), and time signature. Probably going to have folks enter each song as a standalone chart and then create a medley that pulls from those songs, so that they can reuse tunes in multiple medleys with ease. Have been taking this into account while refactoring code this month so I am making progress toward this goal, albeit indirectly and slowly (since I haven’t started working on it directly just yet).

“…enter each song as a standalone chart and then create a medley that pulls from those songs, so that they can reuse tunes in multiple medleys with ease…”

I too applaud the ability to make medleys. Any idea when such a feature will be available? In the meantime, I guess it’s cut and paste …

Too early to predict a release date for this… haven’t started hammering out an implementation yet so I’m not sure how hard it’s going to be. I have been thinking about it a lot, though.

Some details of what I’ve been thinking:

As always, your feedback on any of these thoughts (or something I’ve missed) are most welcome! Writing this out is getting me really excited about this; can’t wait until it’s next on my task list!

Hi … when doing the medley feature – I’m glad this is in your queue! – please make sure to allow us to choose how many times thru each piece we desire (possibly a different number for each). Thanks.

Let me take this opportunity to share a snapshot from my development version of Strum Machine! 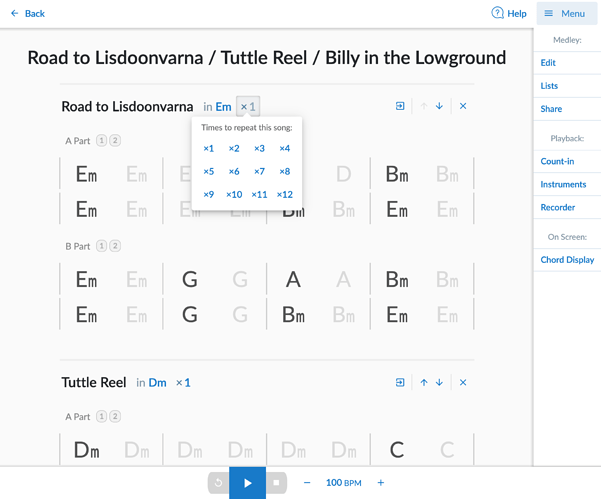 This is a [working] prototype of a medley playback screen… very exciting!

I opened the “how many times through” menu for the screenshot. There’s also a key-changing button next to it on every song. To the right, there is a button to open that particular tune on its own, up/down buttons to reorder the tunes, and a remove-from-medley button. I’ll probably put the playback controls back up above the chords, but I’m not entirely sure.

The biggest question right now is how to deal with BPM changes. Right now the BPM setting applies to every tune in the medley, but I know that folks will sometimes want to incorporate speed changes into the medley. I still want to let someone quickly change the overall speed of a medley, though. A couple ways I could go about this:

With #1, the BPM changes are based on the previous tune’s BPM, whereas with #2 everything is based on the overall BPM setting. With #2, reordering the tunes will have no effect on their speeds; the same cannot be said for #1.

Sooner or later I’ll have to choose an approach and stick with it, but I may wait until the beta version of medleys is released so I can get some feedback on it… hopefully later this month!

Update: Medleys are now available in the latest beta version of Strum Machine!