Hey Luke! Great program, and I’m enjoying the stand alone version! This forum is a great idea, too. SM was part of a review I did of my vital software and equipment when jams canceled (https://aftm.us/resources/reel-times).

Here is my suggestion. I know I’ve mentioned it previously. From a list view as shown below, it would be so cool if I could sort by key and by time signature in addition to the already available title or a manual sort. When I attend an old time jam, I like to be able to sort by key, but otherwise I leave my lists sorted by title. I’m not sure how difficult this would be.

Keep up the good work! Folks in Texas love SM! 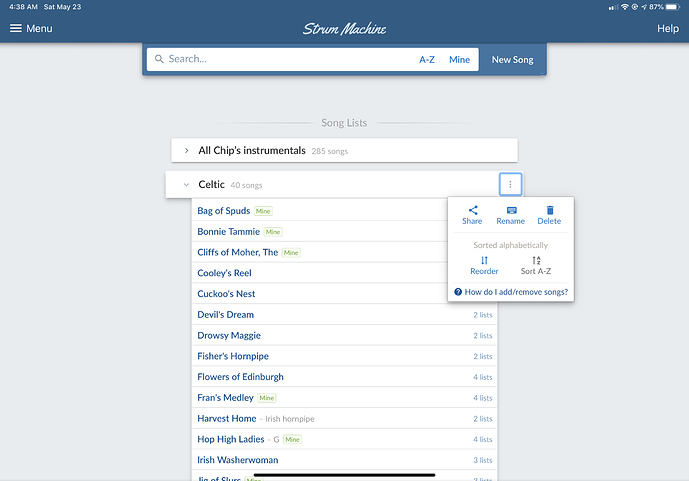 Re: ATFM article – That’s a nice overview of music-related tech you wrote; thanks for including Strum Machine in it!

Sorting a list by key (or even just displaying the key next to each song name) is tricky. Unlike the song title, the key preference can be changed on a per-user basis so its stored separately from the song record in the database. So whenever the key is changed, I’d have to have the server go and update the list. Not a huge deal… but what about when lists are shared? Who’s key preferences are being used to sort the list?

One option would be that the list is only sorted by “default key” – the key that the song is in when you create it or edit it. For fiddle tunes, that’s usually the key you play it in anyway. That might work in a pinch… although I’m not sure how I feel about the sort not respecting user-specified keys.

I suppose I could also allow each viewer of a list to have their own custom sorting order. That might be better anyway, because then you could sort or reorder any list, even if its a shared list you can’t otherwise modify.

Either option (especially the latter) would be non-trivial to implement, coding-wise. So I’ll keep it in the backlog for now… but it does seem more doable now then when we first discussed it over email.

Thanks for your input!

As a workaround, I title my tunes with the key first then the name like “G: Lazy John“

I also create my own lists and put only songs of the same key in that list so I can quickly practice a bunch of tunes together all in one key.

Yeah, I know a lot of folks have lists like “G tunes”, “D tunes”, etc. I suppose that’s good enough for most folks, although seeing that Chip’s first list has 285 songs on it I could see him being reluctant to do that!

@ColinField just want to make sure you know you can manually sort lists if you want to; here’s how. Of course, that’s still lacking the visual indicator of what key each tune is in.

Sorry for jumping in late. Are the notepad notes personal for each person? If so could you add similar fields where each person inputs the key/time signature they consider “usual” for the tune and then use those new fields/notes as an option for sorting? It would be really cool to work it somehow. (Yeah, you’ve created a monster. Strummie is so awesome we all now expect it to be beyond magnificent…e.g. could you also make it so the app tunes my fiddle for me before I play and changes my strings when needed

Yes, whatever you write in the Notepad is visible only to you. I don’t think I’d want to add fields for sorting… instead I’d just use whatever key they have selected, or whatever the tune was written in (which is generally going to be the default for that tune). Still something I’m thinking about but haven’t started building yet.