Just updated the beta site to the new version that I talked about in my last update. Not only does it have a lot of under-the-hood work on the codebase (nearly 20,000 lines of code changed!) but it includes several new, oft-requested features:

I whipped together a little video overview of what’s changed: 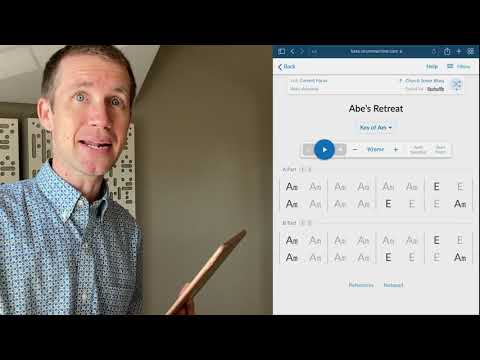 I haven’t written help docs yet, but I’m going to make it a point to be super-responsive about any questions or feedback you have about this beta – let me know if anything was unclear or confusing, even if you figure it out in the end, because it will help me to either improve the interface or at least make better help documentation.

To submit questions or feedback, just go to Help in the top-right corner of Strum Machine, or reply to this post. Thanks!

Here’s the link to the beta site: beta.strummachine.com

Exciting stuff. Thank you for all you do to keep this program on top of it all

Thank you for all your work on the site and for this neat introduction on the new beta features. Happy to have the medleys!

Great work! The Medleys (we’d call them Sets here in Scotland) will be hugely useful, as will the Volta feature.

VERY much enjoy strum machine, and use it almost daily! I am continually discovering features that help me with various learning projects.
One feature I haven’t found is the capability to count the number of times a tune has been played, and keep a record. Is that possible?
Thanks for all your work…

Getting some great feedback so far!

There’s a bug that’s preventing key customizations in medleys from being remembers. Fix for that coming soon.

It’s been brought to my attention that some songs which don’t naturally resolve at the end need to have a coda/outro section to finish naturally when played as a standalone song or the last song in a medley/set, but that coda needs to be ignored if in the middle of a medley/set. Planning to ignore outro sections in medleys (except for the last tune) by default, and have a way to change this in the medley editor if needed. UPDATE: This is now the [overridable] default in version 351.

If there are any other ways in which the medley editor is not giving you what you need to create the arrangement you want, please let me know!

@NickReiter - Honestly, I tend to call them “sets” as well, but since the word “set” has many meanings and might possibly be confused with the “lists” features in Strum Machine, I went with “medley” instead.

@MarkHoward - Tracking metrics like play count is something that’s been brought up before, yes. It’s more complicated than you might think, though, and not a high-demand feature, so I’m putting the idea on the back burner for now, but I do have it on my list of things to consider for the future.

Thanks very much for quick reply…
Counting not a big issue with me, and I’m sure it’s very complex. I can set up plays of 5x, 10x, etc, and count sets with pencil and paper: easy enough….
Thanks, and love SM!

Wow! Your beta of your partial update has most of what I always felt was missing. I was copying and pasting songs together as section to create one huge song to play a set before. Not easy or that practical. I do have one question. What is the different between having a list auto play or creating a medley? Seems like since you can shuffle a list and put it on autoplay, what does a medley do that’s different/better?

What is the different between having a list auto play or creating a medley?

When you want to combine several tunes into a “set” that goes from one tune to the next seamlessly, use a medley.

On the other hand, if you want to practice a bunch of songs one after another, but the songs don’t necessarily flow from one to the next, then using a list is the way to go. You’ll be able to focus on one song at a time, each song will have its own independent BPM settings, you’ll have time to transition between mis-matched songs, and you’ll have every tool in Strum Machine at your disposal if you need it. (You can’t make loops or use Auto-Speedup/Auto-Modulate in a medley.)

Let me know if there’s anything else I can clear up!

Thanks for that clarification. Show a lot of promise. Three things:

Maybe for medleys, while they’re playing you could just show a list of all the songs in it with the current song highlighted. That way you could see what the next song is. Otherwise, from a Web development perspective, I’d you have to handle scrolling differently when a medley is playing and check if the next song is below the fold, then take some action to scroll it up one line. I know as a retired Web developer, I wouldn’t want to add that feature because of the PITA factor ;-). So seems like just somehow showing a list of medley songs with the current song highlighted is the easy way to inform the user where s/he is in the progression.

Out of curiosity, are you using Meteor as your framework? Just seems like whatever you’re doing, there’s web sockets updating the backend data in real time for persistence, so it feels like a Meteor app. Otherwise you wrote one hell of a complicated pub-sub module to handle all of this.

There is currently no way to add a song to a medley after it’s created, though you can delete songs.

There actually is an “Add song to medley” button if you scroll to the bottom of the medley. I was concerned that some folks might not know it was there, though, and it sounds like that concern was valid. I should add that button to the “Edit” sidebar menu for medleys as well.

Medleys could use some kind of naming rather than the current combination of all song titles.

Agreed. I’ll add the ability to type in a custom name in the future.

When it’s ready to advance to the next song in the medley, I can’t see which song that is until it jumps/scrolls into view, which means I’ve already missed the first down beat.
. . .
[You could] handle scrolling differently when a medley is playing and check if the next song is below the fold, then take some action to scroll it up one line.

I like that solution! If you get to the last line of a tune and it’s going to advance to the next tune in the medley after that, Strum Machine should bring the next tune into view. That should be totally doable. Some PITA factor, but nothing compared to the headache of building a reliable auto-scroll feature in the first place.

I’ll see if I can get that going later this week.

I could also show a list of tunes on the side with the current song highlighted, but I’m not sure it’d be worth giving up that screen real estate…

And yes, Strum Machine is built with Meteor! It was my first project with the framework and I think it was a great decision. Really helped get the first version ready for use quickly, in particular.

I’ve been thinking about the medley issues with not seeing a song below the fold. Rather then have to manage scrolling in songs below the fold, along with the code necessary to do that, why not just reuse the code for the navigation bar you already have for playlists. As they are now, you have navigation breadcrumbs showing the previous and next songs. Could you reuse that for medleys? With auto-advancing playlists, I glance at the navbar early on to see what the next song is going to be long before it will be played so in my head I’m ready for it. If medleys had a similar fixed bar at the top with the info and the next up song, that would solve most of the issue of not know what was coming up.

You could still add in some scroll into view feature for upcoming medley songs later on and a secondary feature.

Beta version 352 has just been deployed, with a few improvements around medleys:

And last but not least:

@RobertBiggs, it was actually a lot easier than I thought!

Hopefully that solves your issue and there’s no need for additional UI.

OMG dude. You nailed it with this update. Thanx soooooo much

Medleys are now probably the best thing about StrumMachine.

Holy Smokes! This thing is so good on my iPhone now. Medley name font size is a lot big, so easier to see while I’m playing and checking to see what’s coming up. In the future I’ll be using this with a bluetooth speak for public performances.

This is awesome work. Thank you for his awesome service/product. I use Strum Machine to help practice taking solos and its really helped me a lot.

Hey Luke. When I first make a medley, it prompts me to add it to a list. I created a new list for a medley. This works fine. But, if I add a second medley to the list, when the first medley finishes it automatically starts playing the second medley. At first I though this was because the list had “Auto Advance” on, but this option isn’t even available in a list with a medley. Not sure if this is a bug or if this is a “feature”. Either way, could we get some control over whether a list of medleys auto-advances or not? Thanks so much for all your hard work on this beta.

That said, I’m unable to reproduce this issue on my end.

I’ll send you a private message to continue the investigation.

Aiming to get this released to the main site and apps by mid-November!